Our first stop in our Southern Florida adventure was the Everglades National Park. It isn’t exactly on the way to the Florida Keys or our ultimate destination, Dry Tortugas National Park, but it was too close to be missed, and we had a day to spend, and why spend a day sitting in the sun by the pool when you can be visiting a swampy national park?

The Everglades was a great day trip. From the Miami side entrance there runs a 40 or so mile road down to the gulf side of the park. Along the way are stops for short hikes and overlooks. We spent a few hours meandering our way down, getting out for brief strolls overlooking wet grasslands and dry and dormant, but not dead, trees. We wandered through shady mangrove forests that ended on large dark lakes, all the while enjoying the sun in our short sleeves and shorts.

The Anhinga Trail was the first and best of the trail spurs. Named for the black bird with oddly piercing blue eyes that swims underwater like a fish and then fans his wings in the sun in an action of mutual vanity and pragmatism, this trail featured the greatest abundance and diversity of wildlife.

We saw lots of animals, mostly of the unfriendly variety.

There were the standard waterfowl, herons and anhingas, in abundance. And then there were alligators. The first gator I saw was hardly visible, mostly submerged in a dark, reedy, overgrown area along the bank. I took a picture because you don’t see alligators every day, right?

If this had been 10 years ago, I would have been upset at wasting my film because there were alligator shots to be had everywhere. We probably saw 15-20 alligators in our 0.8 mile loop, and I got a lot of better pictures, including a shot of two gators swimming along together.

Rubber is the new crack

However, the really crazy wildlife adventure at this park is not the gators, but the vultures. We drove into the parking lot and saw a sign that said to cover your car because of vultures. What?

At first I didn’t see any vultures, and I wondered if this was some candid camera stunt or how the rangers tell the locals from the tourists. But there was a bin by the bathrooms with tarps and bungee cords, and all the other cars were doing it, so we covered our little green rental in a tarp and hit the trail. If it was a peer pressure test, we failed.

We turned the first bend and the warning was validated. A group of three or so vultures were pecking at a the rubber on a sign, and we realized these birds were nuts. They eat rubber, I guess because there is not enough dead and decaying stuff in the swamp for them, they need rubber.

When we got back to the parking lot there were more cars and more vultures. The large tree in the center of the lot was full of vultures lurking waiting for a tasty rubbery treat to come by. They like to eat the soft rubber around the seals of doors and windows and off the windshield wipers.

Not only do they eat rubber of uncovered cars, they will pull the tarps off cars. As we were heading back to our car a half dozen or so vultures were grabbing a poorly secured tarp off another car. (Reason #217 to travel with an engineer: Your vulture protection tarp will be securely fastened.) Jeff chased them off, and tried to re-cover the car, but who knows. All the tarps had holes in them from being pecked and torn by the vultures. 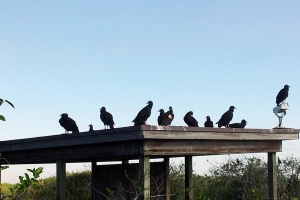 People of the brave but crazy variety

At the far end of the Everglades we saw something we had not expected to see–an American Crocodile, also known and Reasons #1-37 why I am never canoeing in the Everglades. Ironically the croc was sunning himself about 30 feet from the canoe dock, which provided us, the safely land-lubbing observers, some entertainment.

Scene: Couple intent on taking out a canoe approaches dock and is fitted with life vests. Park personnel provide patrons with paddles and prepare the canoe.

Park person tries to convince that this is not a dangerous situation.

Fellow tries to act unconcerned in front of park dude and girl.

That park person has missed his calling and should be in sales or running PR campaigns or something.

3 thoughts on “Gators, Vultures, Crocs- Rubber is the new crack”