When it comes to beating the cold, I’m a big believer in escapism.

Get out. If the cold won’t go away, just leave. Some things are too big for you to fix or change; don’t fight the impossible, abandon it. I realize this advice, if applied to other situations, could lead to a great collapse of personal responsibility. That’s what the cold will do to you.

I discovered the wonder of this philosophy when we took our honeymoon a couple of months after our wedding, and headed down to the Caribbean in middle of January.

Since that time I’ve had the nagging hankering come January and February to split for warmer climes. This year we did, heading down to the Florida Keys for a few days for some sunshine and sweater-free weather. Our plan was to head to the Dry Tortugas, or that was Jeff’s Plan; my plan was to be warm again. The timing couldn’t have been more perfect.

What is Dry Tortugas?

70 miles west of Key West sits a fort on a small island. The hectagonal brick structure is the largest all brick structure in the Western Hemisphere, and the island is now the most remote National Park. If you ever see the words “remote National Park” together in sentence, you have probably identified a future vacation spot of the Fetzers. Because perhaps the only thing my husband loves more than actually going to beautiful and remote places is taunting his father from them.

The Island is only accessible by boat or seaplane. Most of the travel literature on the Dry Tortugas recommends visiting in your own boat, which I’m pretty sure is the way I would rather visit most of the world, but alas.

In the event that private yachting is not feasible, a ferry runs from Key West to the Island, or you can take a seaplane. We took the seaplane. From our place in the sky we could look down and see sharks and rays swimming in the clear blue water below. Mostly we saw Sea Turtles. Lots of Sea Turtles. It’s hard to gauge exactly how big they were, but big enough to see from the sky. 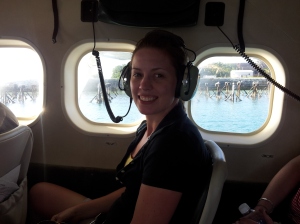 Facilities on the island are pretty simple. There is a fort. Being a National Park, there is a gift shop, which is the only air-conditioned spot on the island. There is a small tent camping area outside the fort, and there are lovely, lonely white sand beaches. You can walk out into the crystalline water for quite a ways.

The seaplane company provided snorkeling equipment, and we had two lovely swims right off the beach. The best snorkeling is around the pilings of an abandoned dock where coral has taken hold and a vibrant and colorful world flourishes beneath the surface. When we swam out into the open water, the fish got bigger. We saw some barracudas and one sting ray. We also saw a small group of those fish that look like they had their makeup done in the eighties. I don’t know the name.

The one downside of snorkeling is what I call SBIBS, or Sunburn in Bad Spots, namely the entire back of my legs. We did use sunscreen, but we were pretty pale, and the sun is brighter down that way, so our burns were kind of terrible. Mine ended up being so bad that my feet and legs swelled up and for about four days I could barely walk. (I can feel your lack of sympathy.)

There is this one problem

The problem with my escapist theory is that eventually you have to go home. Unless you are part of the world that does travel by private yacht, you eventually have to come home and support your escapist venture. This alas was true for us.

We left Miami Tuesday morning on a cloudless blue sunshine day. It was 75 degrees when we arrived at the airport around 10 a.m. We arrived in Norfolk around 2 p.m. and as we began our decent through the gray clouds, we noticed something. The ground was not dead winter brown. Our town was white. More freaking snow! Sometimes you just can’t win.

This has been part one of two posts on our quest for warm weather. Part two featuring the Everglades is coming soon!

One thought on “Giving Cold the Cold Shoulder: How to beat the winter blues”