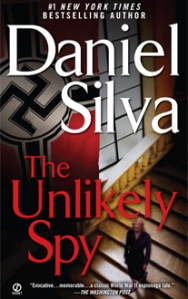 My younger brother, from whom I never take advice, told me once that guilty pleasures are stupid.  If something’s a pleasure, you should not feel guilty.

This sort of hedonism is either the best or worst philosophy.  It all depends on how long-term your approach to pleasure is.  But who wants to take the long view when you can just turn the page and find out if the assassin manages to take out the Prime Minister?

Not me, that’s for doggone sure.  So I deal with the guilt.

If you can read spy novels without feeling guilty, I don’t want to make you feel bad.  Most of my guilt stems from an actual problem I have, which is being a book snob.  When I read a spy novel, I think that I could and should be reading something better, not because the books are bad, but because I’m better than them.

I think reading literary books makes me a superior human being, but it doesn’t.  (Anyone who knows me well knows my superiority comes from being able to eat more ice cream than some grown men.)

I also feel cautious about wasting my time on certain books because I read slowly.  When I read, I subvocalize, which means I hear the words I’m reading in my head.  This slows down my reading; it also makes me a slow typer.  (Basically I’m innately slow at the two things I do the most.  Good career choice!)

Being a slow reader puts me in a challenging position.  I worry that books that are interesting or enjoyable reading may not be worth reading, but at the same time I don’t want to waste my time reading something that’s supposed to be good if it is dull as dirt.  that said, I try to keep my reading broad and adventurous, but I will quit books that are not good or enjoyable to me.

I recently finished reading Daniel Silva’s book The Unlikely Spy.  Silva is one of my favorite spy novelists.  I have read a couple of his books featuring his recurring character Gabriel Allon who is an agent for Mossad.  The Unlikely Spy is not a part of Silva’s Allon series.  It is a stand alone novel set during World War II.

Note:  I will now undoubtedly be under heightened surveillance for Googling Mossad (possibly the only government intelligence agency with a Bible verse on the homepage) and writing a post with the word Mossad in it three times.  It was nice knowing everyone.

The book tracks Alfred Vicary on his rise from a musty London history professor to master spy.  As he coordinates an effort to mask the Allies’ intentions for the D-Day invasion at Normandy, he encounters an array of colorful characters.  London crime rings, a brilliant and handsome American engineer (always a good thing to find), a ruthless and charming German spy living in deep cover in London, IRA expatriates and more all intersect the mission.

Silva shines at creating compelling and sympathetic characters.  He’s obviously not a Nazi sympathizer, but his portrayal of the conflicted German spy master and the brutal but clever Nazi field agent turns them into people you care about even while you hope their missions fail.

Vicary spends long days in a cramped office while he masterminds an intricate counter-intelligence network.  He eventually is brought in to work on the most important counter-intelligence mission of the war–misinforming Germany about the location of the D-Day invasion.  As he comes to regret and despise the man he becomes as a result of the pressure and nature of his work, he elicits our sympathy and respect.

With Vicary Silva creates not an anti-hero, but a non-hero, an unlikely hero.  Vicary is the opposite of a typical spy novel protagonist.  He is no James Bond for sure.  His ordinariness gives the book credibility, or at least the impression of verisimilitude.  Spying is more desk work than fast cars and high stakes poker and exploding–everything.  He is more Tinker, Tailor, Soldier, Spy than 007.

If Vicary is everything atypical in a spy story protagonist, then Catherine Blake, the German agent in deep cover in London, has everything you want and expect from a spy–beauty, brains, brutality.  She does whatever it takes to get her hands on the information she needs.  She is your Bond villainess, your undercover femme fatale.

Yet she too has twinges of conscience–not for her work for Germany, but for her deception and manipulation of people who trust her.  Silva creates an excellent crisis of desire for the reader who ends up wanting her mission to fail, while at the same time hoping she can get away with it.  In this way there are some similarities between The Unlikely Spy  and The Eagle Has Landed, which is one of the rare cases where I preferred the movie over the book.

From my reading I observe that ending a book well is one of the hardest things to do.  This book struggles at the end.  Silva has created some intriguing characters, particularly his chief German spy, but as the story comes to a head, he doesn’t quite seem to know what to do with them.

I don’t hate “bad endings” with a bloodbath of literary carnage.  I think most books would be better if the author loved the book as a whole as well as he loved the characters in it.  (I’m looking at you J.R.R.)

Several people die at the end of the book, which is not surprising in a book about Nazi spies trying to thwart the Normandy invasion.  At some point history forces you to curtail the “what-if” scenario.  Killing off characters at the end is not the problem.

The ending feels abrupt and rushed.  Without much explanation suddenly several people are dead and the loose ends are tied up and the book is over.  My head was spinning, and not in a good way.  Since The Unlikely Spy was Silva’s first book, I attribute this shortcoming to inexperience.  I haven’t felt disappointed about any of his other endings.

I know I won’t quit spy novels–I like them too much, and they read so quickly.  If you like spy stories, I recommend Daniel Silva’s books.  I’d love to hear your suggestions as well.  If you have a favorite spy author or novel, drop a note in the comments, and I’ll check it out as my time and conscience allow.