Swimming–I’m not a very strong swimmer, but I wanted to add swimming to my exercise routine because I need to do more cardio, and I hate running. So I signed up for a 4 week class at the rec center. I was not the worst person in attendance, which is always a little gratifying. I have increased my stamina from 8 lengths to 12, but I still cannot figure out how to coordinate breathing in my breast stroke.

Audio Books– When I was a child I thought that the underground railroad was an actual railroad underground. In Colson Whitehead’s The Underground Railroad, he presents an alternative history of antebellum America in which it is a literal railroad. The book presents the harsh dystopian reality of black life in America as well as a utopian vision of black freedom and self-determination.

Books– My two boys are budding readers, and I’ve been enjoying the opportunity to scope out some chapter books we can all enjoy. My favorite so far have been The Lighthouse Family series by Cynthia Rylant. (We also enjoy her series Henry and Mudge). I appreciate the gentle storytelling and the absence of frantic action and bodily function humor.

Books–When I read Bloom: 50 Things to Say, Think and Do with Anxious, Angry and Over-the-Top Kids, I thought it was good, but not revolutionary. It offers a basic introduction to brain science and development. The key strength is the specific scripts it provides for dealing with different forms of anxiety. It was not the best parenting book I’ve read, but it is very accessible to parents who are new to positive parenting or who don’t like to read psychology books. Three weeks into the boys’ baseball season, I have a few people I would really like to give the book to, but that’s considered in poor taste.

Books– Usually I read the book first, but with Giant by Edna Ferber, I did things the other way round. The movie is a pretty straightforward adaptation. The novel centers the female protagonist, Leslie, more than the film. The book gives less time and nuance to the Jett Rink character. As a non-Texan myself, I certainly appreciated Leslie, an educated Virginian, and the other-worldly experience of moving to Texas.

Movie– Giant, the movie is long, but somehow still feels like it rushes through the second half. However, one of my favorite things to do with movies is to look at alternate versions of the movie posters. Sometimes you run across things that are more creative and less commercial, and sometimes you find something that is just wacky, and misrepresentative. In this case I got super lucky. 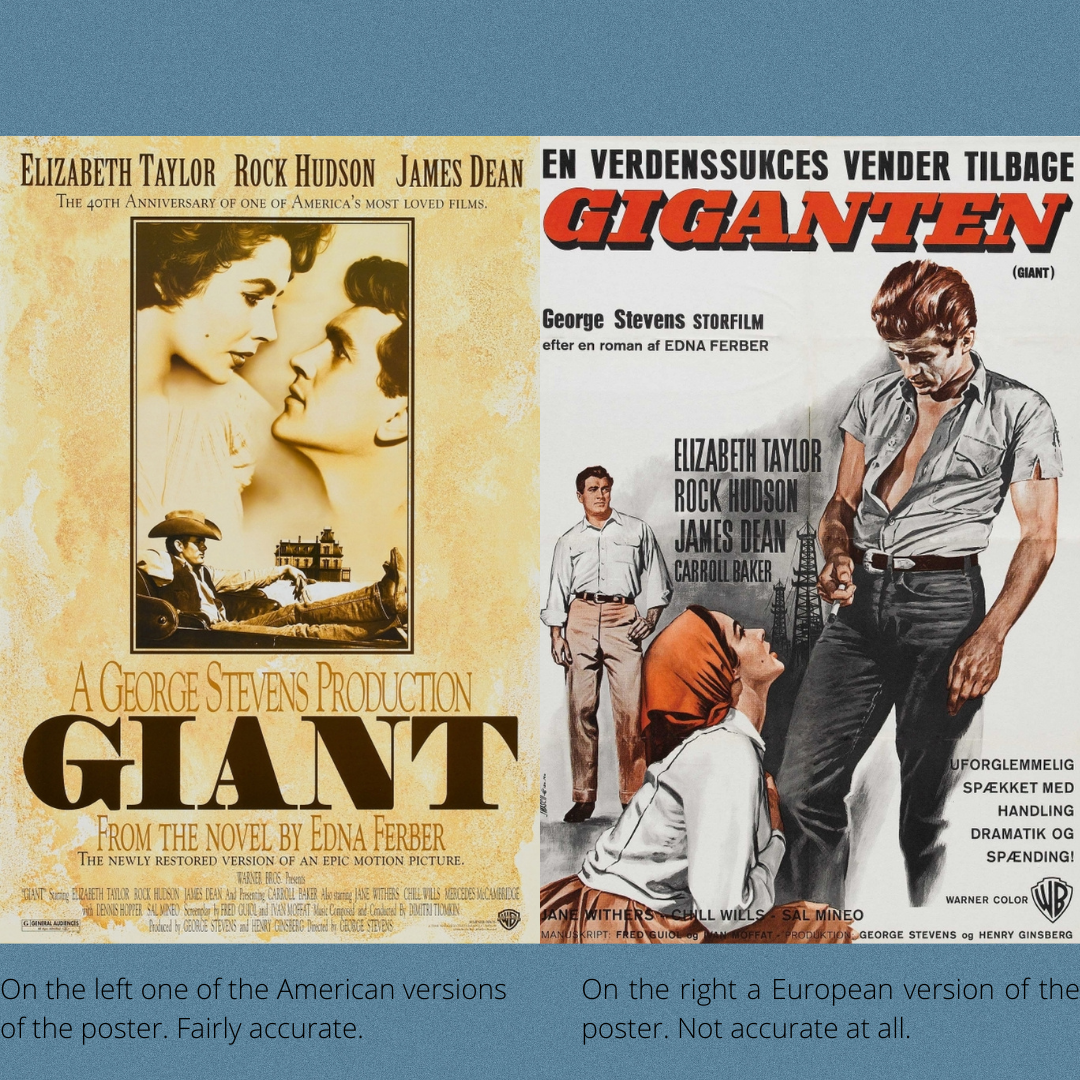 Don’t get me wrong, I would watch whatever movie that is on the right, but it’s not Giant.

I saw this movie probably 15 years ago, and wasn’t blown away. When I watched it on TCM, I realized that I had probably seen the theatrical release, which was only three and a quarter hours long. The TCM version was just over four hours. It’s a tale as old as time, accountants interfering with artists. The director, Joseph Mankiewicz, really wanted it to be two three-hour movies and shot six hours of film, but those two additional hours appear to be lost.

All that to say, I really loved this four hour version, and I would definitely watch a six-hour directors cut, if they ever find that film.